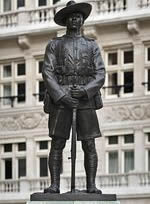 During World War I (1914–18), more than 200,000 Gurkhas served in the British Army, suffering approximately 20,000 casualties, and receiving almost 2,000 gallantry awards. The number of Gurkha battalions was increased to thirty-three, and Gurkha units were placed at the disposal of the British high command by the Nepalese government for service on all fronts