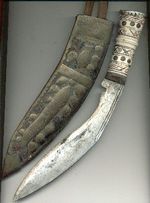 Probably the most renowned fighting knife in the world is the kukri, the wickedly curved knife of the Gurkhas of Nepal.

In the hands of an experienced wielder this knife is about as formidable a weapon as can be conceived. Like all really good weapons, it’s efficiency depends much more upon the skill that the strength of the wielder and thus it happens that the little Gurkha a mere boy in point of stature, will cut to pieces of gigantic adversary who does not understand his mode of onset.
The Gurkha generally strikes upwards with the kukri, possibly in order to avoid wounding himself should his blow fail, and possibly because an upward cut is just the one that can be least guarded against.